Sometimes you meet someone in your life that you have an instant connection with, no matter how brief. Someone who you feel like you’ve known forever. Then in an instant they’re gone & the loss is rough to take. Carl Albert (Vicious Rumors singer) was one of those people. I was barely 20 years old when I met Carl & his band Vicious Rumors in Pittsburgh, Pa. They played at a club called the Electric Banana. Yeah, I know.. They were traveling by van at the time. My friend & I had gone out before the show to try to meet the guys. All the guys were super but I was drawn to Carl. He was funny, warm, & really sweet. We sat in the van for at least an hour, maybe more, talking. This was impressive for me! I was so shy that I could barely say “Hi” to most people. But Carl was something special. I remember after our first meeting I was hoping so bad that our paths would cross again.. I remember him kissing me before I left. I just couldn’t stop thinking about him. 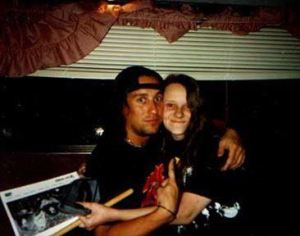 Our paths did cross again & not very long after we first met either. Ironically at the same club, the Electric Banana. This time I was there trying to meet Savatage. Carl & Vicious Rumors were passing through on the way to play a show in Baltimore. They decided to take a little detour to stop & see Savatage. This time they had a bus! I was happy to see him again. He invited my friend and I on the bus. It was the first time I had ever been on a tour bus in my life. I was petrified & excited at the same time. Again we talked for a few hours. My friend was totally bored out of her mind. The other guys started to get on the bus. Carl didn’t want me to go. I remember him telling me that I couldn’t get off the bus & that he was taking us to Baltimore with him. He was going to “kidnap” me. My friend started to protest so he told her she could go and the bus driver opened the door and let her off. I finally managed to convince him to let me off the bus. Not saying that I wouldn’t have let Carl kidnap me because I would’ve! Sadly that was the last time I saw him. There went a piece of my heart.

I’m fighting an internal battle over you. My head wants to forget you with all the power it has but my heart just won’t let you go. You have an inner control of me that I can’t take hold of. Invading my thoughts during waking hours even though I try so hard to erase you from my mind. My heart always interrupts me. Now you enter my dreams too, disturbing my sleep. Having such a profound impact that my dreams are carried to the waking and stay with me as I try to escape. Escape like a drowning man trying to get out of the water. I thought this would be easier but it hasn’t been. I thought I would be stronger but I’m getting weaker every day. And the battle axe comes down.. And the battle axe comes down again…

© Ariann Boisvert. All rights reserved. Reproduction of any content, images or sounds, in whole or in part, without express written permission, is prohibited.